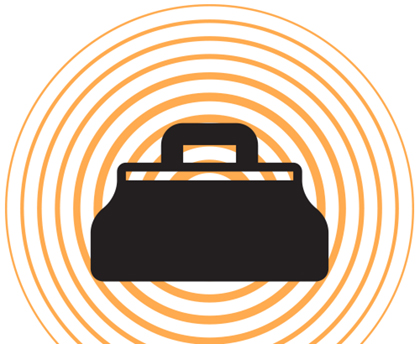 What is it about Sir William Osler, anyway? We evoke his name around here a lot, and for good reason: he was the founding Professor of Medicine at the Johns Hopkins School of Medicine. He was also a master diagnostician whose teaching at the bedside revolutionized medical education. On the faculty today are many excellent physicians who were taught by excellent physicians whose teachers learned their craft, in turn, either from Osler or one of his residents. So, his legacy here is strong, and his ghost seems to be very much with us.

But it’s been nearly 130 years since the Hospital opened, and by and large, most internists and residents are still basically approaching the patient at the bedside with “no better tools than Osler used” – mainly a stethoscope, an ophthalmoscope, for looking into the eyes, an otoscope, for checking the ears, and a percussion hammer, says Vice Dean and CIM Director David Hellmann, M.D. “And that’s unfortunate, because even in Osler’s hands, these tools in a number of settings weren’t very good. There’s no reason to think the physical exam has mystical powers when it doesn’t.”

In case you ever wondered exactly what a doctor is thinking when you’re told to “Breathe in, breathe out” as the stethoscope moves around and the exam room is in otherwise dead silence, here’s some of the inside scoop from Hellmann:

Have you ever wondered exactly what a doctor is thinking when you’re told to “Breathe in, breathe out” as the stethoscope moves around and the exam room is in otherwise dead silence?

Determining if someone has a low oxygen level is “perhaps more straightforward,” says Hellmann, in that “oxygen level can’t be measured by physical exam at all. And yet, it is life-threatening when low.”

Another part of the physical exam, where the doctor feels around your abdomen, can suggest when someone has ascites, or fluid in there. But not always. “I admitted a patient years ago,” recalls Hellmann. “Four doctors swore he had ascites by physical exam. The next day the ultrasound showed he was just obese.”

Hugely enlarged spleens “can be detected well on physical exam by feeling the tip of the spleen.” However, most of the time, the enlargement is not huge and “you can’t feel it. But you suspect it on percussion – tapping your finger over the belly – because the sounds you usually hear, which are tympanic (hollow-ish and resonant, like the sound of a drum) over the stomach turn to solid sounds when the air–filled stomach is crowded out by the log-solid, enlarged spleen.” However, he adds, “eating a big Mac with fries will cause the same changes in percussion! Fingers can be fooled. But ultrasound is not fooled.”

Imaging tests, of course, can show all of these things – but not immediately, right there at the bedside. The bedside physician needs to put in an order for the test, someone must wheel the patient down to Radiology, where a tech will administer the test, and then later a radiologist will read it. Sometimes this can take a day; sometimes even longer.

ULTRASOUND AT THE BEDSIDE

So, how can we improve the physical exam and ability to make a diagnosis at the bedside? WWOD? What would Osler do?

Sir William Osler might be very interested in the use of a device that fits easily into the pocket of a white coat, called handheld, or hand-carried, ultrasound.

With it, instead of just listening to your heart, doctors can actually watch it contract. Instead of simply taking your pulse, they can measure your blood flow, check your heart valves, look for narrowing or an aneurysm in major arteries – which means you’re at risk of having a stroke or heart attack – and even spot a gallstone. They can do all of this in real time, right there, in the emergency room, hospital bed, or clinic, instead of either wheeling you to Radiology or worse, making you come back for an appointment to get an image.

Handheld ultrasound is not a new idea for Hellmann; it’s one he has believed in for more than a decade. He worked with a company called SonoSite to get a portable ultrasound machine into the hands of residents, and in 2005, he and colleagues published a study in the American Journal of Medicine demonstrating that residents could indeed learn the basics of handheld ultrasound and use it successfully at the patient’s bedside.

Consider, Hellmann says, the example of the defribrillator: “They used to be big and expensive, and only used in hospitals.” No one imagined at first that such a powerful device could ever be used safely by non-medical people. But it has been, with great success. Now, in fact, the defribrillator is as visibly available as a fire extinguisher in many places where there are lots of people: hotel lobbies, airports, and big box stores such as Home Depot.

Hellmann doesn’t advocate putting handheld ultrasound in Wal-Mart, but he would like to see it become a staple of the doctor’s bag. Already, because of Hellmann, internal medicine residents at Johns Hopkins Bayview – unlike internal medicine residents anywhere else – are trained to use handheld ultrasound. Now kidney disease specialist Tariq Shafi, M.D., is leading studies to find out whether using handheld ultrasound “can make diagnosis faster, cheaper, and more convenient to patients while improving patient care.” Because “imaging is not really available at the point of care,” says Shafi, patients in hospital beds or the clinic must go where the big machines are – “even though the technology has improved and become miniaturized and is available in a hand-carried device.” He believes the use of handheld ultrasound will “complement the physical exam, not replace it. It can actually improve our diagnostic skills, as we get more information in real time about what’s happening to our patients. It can also improve our connection with the patient.”

If you have ever had medical imaging, most likely a technician performed the scan, didn’t tell you anything, and you either went home or back to the hospital room and waited for a radiologist to read the test and then tell your doctor, who told you the result. With handheld ultrasound, the doctor reads the result right by your side, and tells you about it in real time.

Some educators fear that if young doctors learn to rely on technology in making their initial diagnosis, then their clinical skills will get sloppy – that they will lose the art of the physical exam. That they will rely on the technology as a crutch – the medical equivalent of people who can’t get from Point A to Point B without Google maps or GPS. “But really,” says Shafi, “the problem is, you don’t get the all the answers you need from just a physical exam.” In his field of nephrology, for instance: “People with advanced kidney disease on dialysis are often in a state of volume overload. Water can go in,” but with the kidneys not working at all, that water has no way to come back out. “We can assess someone’s volume status with certain physical exam skills – checking for edema in the legs, or listening for lung sounds that suggest fluid overload. These tend to become really obvious when someone has severe volume overload.”

Figuring this out at the bedside is now largely subjective, Shafi says. “If we think somebody has too much fluid and the person actually is not in overload, and we remove too much fluid on dialysis, it can make the blood pressure go down,” the results can be disastrous, and can include a stroke or heart attack. On the other hand, if the patient is in volume overload and the doctor doesn’t realize it, that extra fluid can cause blood pressure to escalate and make the heart work too hard.

Handheld ultrasound can help make the call. If the probe is held to the heart, it can show how well the heart is squeezing blood. Held to the inferior vena cava, the large vein that runs through the abdomen and carries oxygen-depleted blood from the lower body back to the heart, it can show whether the blood flow is normal or not. “It’s like looking at a river,” says Shafi. “If it’s big and stretched and looks like it’s overflowing its banks, you know there’s too much fluid.” Held to the lungs, the ultrasound probe can show signs of vascular congestion. Because of hand-carried ultrasound, Shafi explains, “I’ve really changed my clinical approach.”

Some educators fear that if young doctors learn to rely on technology in making their initial diagnosis, then their clinical skills with get sloppy. That they will rely on the technology as a crutch – the medical equivalent of people who can’t get from Point A to Point B without Google maps or GPS.

The device does require training; a doctor can’t just point and shoot and have a machine come up with a diagnosis. If, say, you are a doctor and you use the device, did you read it correctly? Did you miss something? Or, at the other end of the spectrum, did you get too much information? “Do you pick up things that may not need to be found?”

These are among the questions Shafi hopes to answer in the near future. But his hypothesis, and Hellmann’s, is that this technology – even in a world that’s already so high-tech – can improve the way we practice medicine at the bedside.

Our doctors are not alone in worrying about a device somehow adding another layer of distance between them and their patients, and diminishing the quality of their interaction. In December 2015, two Harvard doctors wrote in the New England Journal of Medicine: “As we move deeper into the electronic age, we are pulled father from our patients… House officers must document everything and monitor all that is documented, spending more time face to face with a computer terminal and less with patients… remotely monitoring patients who may lie only feet from the computer.” That article focused on the use of electronic stethoscopes as a way to use technology to “draw us closer to, rather than farther away from, our patients,” and concluded, “Rather than letting the collation of data characterize us as clinicians, we would do better to see ourselves as ‘those who visit patients in their beds.’ That is the literal meaning of the Latin clinicus, from the Greek klinike, (practice) at the sickbed. Devices that bring us closer to the bed breathe new life into our roles as healers.”