Why We Are Who We Are? A Tribute to Mary Elizabeth Garrett 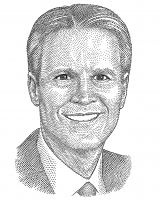 I’m writing to you because something really important to the future of Johns Hopkins happened on Christmas Eve. For it was on December 24th, 1892 that the trustees of the university agreed to accept Mary Elizabeth Garrett’s gift that allowed the opening of the Johns Hopkins University School of Medicine. Her donation not only launched the School of Medicine (in 1893) but also carried stipulations that would come to transform medical education in this country. Without Garrett’s philanthropy and her vision, the medical school would have been much less likely to attain so rapidly its preeminent role in medical education. In anticipation of celebrating the School of Medicine’s quasquicentennial (yes, there is a word for a 125th anniversary!), I wanted to highlight not only what Mary Elizabeth Garrett did but also the extraordinary obstacles she had to overcome. Her vision and undaunted courage have great relevance for how at the dawn of this New Year, we at Johns Hopkins Bayview should confront the challenges and seize the opportunities before us.

Mary Elizabeth Garrett made 3 contributions to the founding of the School of Medicine, any one of which would have justified our honoring her in perpetuity.

First, she provided the financial support the trustees had determined was essential to open the School of Medicine. Shortly after the Johns Hopkins Hospital was constructed in 1889, a major recession hit the United States and prevented completion of the medical school. Most of Johns Hopkins University funds were in the form of stock in Baltimore & Ohio Railroad that, during those difficult times, cut its dividend from 10% to zero. Though desperate for funds, the trustees did not initially want to accept Mary’s donation. However, to the trustees’ chagrin, no male donor could be found. Consequently, Mary Elizabeth Garrett led a group of women to the rescue by raising the $500,000 required to open the school. Mary provided the lion’s share of this sum, which in today’s dollars would equal nearly $13,000,000.

Second, Mary attached strings to her gift requiring that the medical school admit women medical students “on the same terms as men”. This in itself was revolutionary at a time when gender rather than merit determined who could become a physician. As Kathleen Waters Sander’s fascinating biography of Garrett makes clear, Mary ensured that the school could not simply pay lip service to the policy that women be admitted on an equal footing with men. For example, Mary required that the gender-neutral admissions requirement be printed every year on the school’s calendar and on the announcements of each year’s courses. To make certain that women were not shunted only to medical fields “appropriate” for women, Mary insisted that women students have all the advantages of men with regard to academic prizes, training, and honors. Evidently, Mary was a proponent of “trust but verify”!

Garrett’s third contribution was to push Johns Hopkins to set unprecedentedly high academic admission requirements for all medical students. These high admission standards are widely credited with revolutionizing medical training in the United States and playing a critical role in establishing Johns Hopkins at the preeminent school of medical education in this country. Specifically, Garrett stipulated that admission to Johns Hopkins School of Medicine could be granted only to those who had:

1. Obtained a college degree,
2. Achieved fluency in either German or French (the languages of science in the 19th century), and
3. Completed rigorous college courses in biology and other sciences.

These standards, now commonly accepted today, were thought by many of the faculty to be unrealistic at the time. After all, during the 19th century not all medical schools required that their students be able to read or write! Yet it was adoption of these high standards that permitted Johns Hopkins faculty, students, and residents to become the leaders in medical education in the United States.

Garrett’s accomplishments become even more remarkable when we examine the daunting obstacles she had to overcome.

It is impressive (and ironic), that the person who played a critical role in setting the standards for medical school admissions was herself never allowed to attend college at the very university she helped make famous.

Mary’s revolutionarily high standards apparently did not come from listening to her father. John Garrett, one of the original trustees of Johns Hopkins, advocated that the university should focus on becoming a technical community college. Fortunately, Mary thought knowledge for the world would have a more enduring impact than skills for the neighborhood!

Perhaps most strikingly, as mentioned above, Mary tenaciously refused to lower the high standards for admission despite being urged to do so by many of the most powerful and revered faculty at Johns Hopkins. Many worried that that there would not be enough qualified students to fill the class. Could it be that the medical school would be built, but no one would come? Kathleen Waters Sander’s book reveals that JHU President Daniel Coit Gilman and William Welch, the inaugural dean of the School of Medicine, also feared Garrett’s standards were not practicable. Indeed, Welch worried that Garrett was conjuring up “educational castles in the air” rather than, as history has proved, constructing the foundation for transforming medical education throughout the world. While Gilman and Welch are rightly regarded as giant contributors to the overall success of Johns Hopkins, it is ironic that an important reason their institution succeeded is that Mary Elizabeth Garrett, a woman with no college degree and no academic credentials, ignored their advice not to set the medical school admission standards so high.

What lessons can we at Johns Hopkins Bayview glean from Mary Elizabeth Garrett and apply to the world we live in? One answer might be that you can accomplish a lot with $13,000,000! Resources are clearly needed to propel change. But I believe the central lesson of Garrett’s legacy is the importance of articulating big ideas and pursuing them tenaciously. Garrett was indomitable in the face of economic recession, sexism, educational discrimination, and countervailing “expert” opinion. While Garrett’s legacy does not prove that every big idea can attract resources and be achieved, her experience suggests that if Johns Hopkins is to remain at the forefront of medicine 125 years from now, we must identify transformational ideas and pursue them tenaciously. Let’s dedicate this year not just to our school’s 125th anniversary, but also to honoring the spirit, methods, and achievements of Mary Elizabeth Garrett. We are who we are, and, we are where we are in good part because of her.