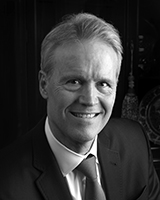 Many of you know that I am huge fan of the musical Hamilton and one of its central themes of relentless determination, which inspired a subsequent rap song with the catchy lyrics: “Immigrants: We Get the Job Done.”

Time and again, I see this determination to “get the job done” play out among the faculty and friends of the Center for Innovative Medicine, in ways big and small. Consider CIM’s annual retreat in late August, which we’d planned to revive (after a one-year hiatus due to COVID-19) at Folly Farm, the beautiful Baltimore County home of Stephanie Cooper Greenberg, who is chair of CIM’s International Advisory Board. While an in-person gathering of 75 to 100 was realistic last spring, when vaccination rates seemed to have COVID-19 on the wane, the Delta variant made those plans increasingly less likely as the summer wore on. But thanks to the pluck, ingenuity and generosity of Stephanie, who truly “got the job done,” the show did go on! In the course of a week, she had an enormous tent erected on her bucolic property, which allowed for about 50 thought leaders from across Johns Hopkins to meet, talk and dream about what’s next for CIM — including, importantly, an ambitious new Institute for Humanizing Medicine. The institute will be led by visionary physician and bioethicist Mary Catherine Beach and Cynthia Rand, senior associate dean for faculty and professor of medicine (p. 2). I’m thrilled that key Johns Hopkins leaders at the retreat — notably Johns Hopkins Hospital President Redonda Miller, Director of the Department of Medicine Mark Anderson and Landon King, executive vice dean for the school of medicine — all spoke compellingly about the importance of this far-reaching initiative.

As you’ll read on p.6, the Institute for Humanizing Medicine builds on the ideas and advocacy of many clinicians with strong ties to the CIM, including Roy Ziegelstein, the Sarah Miller Coulson and Frank L. Coulson, Jr. Professor of Medicine, whose concept of “personomics” is influencing clinicians far and wide, as well as Jeremy Greene, the Jacobs and Rosenthal Family CIM Scholar. Jeremy is leading the charge, at Johns Hopkins and nationally, to make the humanities and social sciences critical forces in the preparation of tomorrow’s doctors (p. 8).

CIM Scholars in other vital areas are also committed to “getting the job done” — including those at CIM’s Human Aging Project (p. 10), pulmonologist and CIM Lavinia Currier Scholar Nadia Hansel, who is investigating dietary changes to aid people with respiratory diseases (p. 12), and leaders of the new faculty promotion track for clinical excellence, which builds on the work of the Miller Coulson Academy of Clinical Excellence.

To all who are working so tirelessly to advance the mission of the CIM, including you, our friends and supporters, I offer sincere thanks and a hearty “Job well done!”.