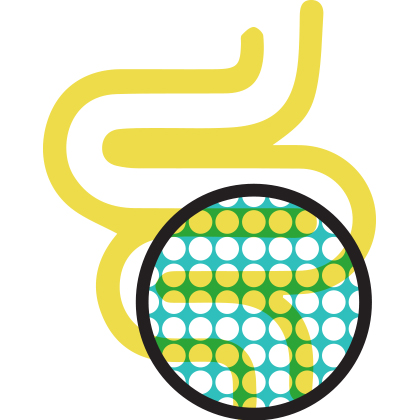 “We listen to our patients,” says Kimberly Harer, M.D., gastroenterology fellow, at the Amos Center for Food, Body & Mind, a CIM initiative. That’s why, when patients who have irritable bowel syndrome (characterized by constipation, diarrhea, and nausea, it also can include anxiety or depression) reported that they have been doing better after changing to a Paleo diet, the Amos Center doctors paid attention – and then Harer designed a study to answer some important questions, including:

If it does, then why? And how, exactly?

What happens to the microbiome – the countless bacteria that live inside the gut – when you stop eating dairy, processed sugars and carbs?

In the study, for two weeks 40 patients with IBS will be randomly assigned to eat either a Paleo diet or a standard, healthful diet. Harer and colleagues including epidemiologist Noel Mueller, Ph.D., will be looking at many things in these study participants, including “how the diet affects their GI symptoms, their quality of life, their vitality,” says Harer. In people who have been experiencing anxiety or depression, the investigators will look for changes in these symptoms, as well. They will study blood samples and patient responses to questionnaires about their health, and then, looking at the bacteria in stool specimens, the scientists will analyze the gut “microbiome” before and after.

Does the Paleo diet, basically, eating lean meats, nuts, fresh fruits and vegetables – foods our Stone Age, hunter-gatherer ancestors could have eaten – make a difference? If it does, then why? And how, exactly?

But the gut takes it to another level; it is the microbial mother lode. In numbers alone, it’s intimidating. “There are trillions of microbiota (tiny habitats) in the gut,” says Mueller. And get this: All of those bacteria in all those micro-habitats have their own genes and their own genomes, which scientists now know how to sequence. “There are 100 to one more microbial genes than in your own human genome.”

This is why scientists at the Amos Center are convinced that the microbiome has an important influence on our health. It’s not just numbers, it’s sheer mass: All those bacteria that live inside our gut, if you somehow got them all together in one lump, would weigh and take up about as much space as your brain – three or four pounds. Trying to get a handle on that would be overwhelming without sophisticated computers and software, sequencing technology, and bioinformatics tools that allow scientists to recognize patterns and identify gene signatures. What they’re doing, in addition to taking care of patients, involves metagenomics (studying the micro-environmental genomics), proteomics (looking at all the proteins these bacteria make), and metabolomics (studying the set of metabolites, molecules involved in metabolism). Whew!

It’s not just numbers, it’s sheer mass: All those bacteria that live inside our gut, if you somehow got them all together in one lump, would weigh and take up about as much space as your brain – three or four pounds.

Because the study of the gut’s microbiome is still so new, nobody is sure what it’s supposed to look like, and how the gut flora relates to symptoms. “Maybe we won’t ever be able to define what is the normal gut microbiome,” says Mueller. “Normal might be different for everybody – just as there are deciduous and coniferous forests. Both can be healthy and have very different species living within them.”

Even in identical twins, Mueller continues, the bacteria in the gut can be very different. It is not unheard of for one twin to have a normal weight, and one to be obese.

Already, at many hospitals gut doctors are waging war with bacteria, successfully treating patients who suffer debilitating diarrhea from recurrent Clostridium difficile (C.diff) colitis with fecal microbiota transplants. Basically, uninfected fecal material from a relative with healthy gut bacteria is inserted into the patient’s colon, the good bacteria overwhelm the bad bacteria and the C.diff. is conquered.

In mice, Mueller notes, scientists have found that if they take the microbiota from the fecal sample of an obese individual and inject it into a germ-free mouse, that germ-free mouse will start to become overweight, too. “The phenotype of obesity can be replicated just through the sharing of bacteria,” he says. There is a lot of evidence to suggest that gut bacteria play a huge role in diseases of the metabolism – which also suggests that if these bacteria can be changed, there is great potential to improve someone’s health.

But first the scientists need to figure out the key players in this bacterial cast of trillions. Imagine the difficulty, on a smaller scale, of putting a face to every name in the New York City phone book, and then maybe figuring out who among all those people are community leaders – local officials, pastors, baseball coaches, teachers – and how they influence others. You might have a huge list of names and some idea of significance, but mostly glimmers in the darkness. Oh, and one more thing: that whole population could turn over fairly quickly. If you get sick and take antibiotics, samples of your gut bacteria would bear little resemblance to samples taken a few weeks earlier. So just when you start to get a handle on the cast of characters, your theater program might be out of date.

Certain families of bacteria thrive on a diet full of macaroni and cheese, soda, and ham sandwiches. Entirely different bacteria could show up if that diet changes to lean meat, nuts, berries, and veggies.

Finally, it’s not even “just” a matter of identifying which bacteria are present in the gut, but “how they’re breaking down the food we ingest,” says Harer. In this study, “we will look at the microbiome at three different time points. First, the baseline, before the diet changes; then, after the Paleo or study diet.” And then one more time: after participants go back to eating whatever they used to eat for four weeks. Blood samples will be taken after that four-week period, as well, and patients will fill out questionnaires to report any change in their symptoms.

“If there are differences in the blood and the stool samples, it will be interesting to see if those correlate with changes in their symptoms,” says Harer. “And we are very interested to see whether reverting back to their old diet causes the former symptoms to come back, or whether there are lasting changes.” Certain families of bacteria thrive on a diet full of macaroni and cheese, soda, and ham sandwiches. Entirely different bacteria could show up if that diet changes to lean meat, nuts, berries, and veggies. Which raises another question: If someone gets better with the Paleo diet, “what part is the beneficial part? Is it the lower carbs? Is it the increase in plants, or in protein content? Is it cutting out gluten?” Or is it some new, beneficial bacteria that have taken precedence in the gut?

It’s important to remember that “the microbiome is just part of the study,” Harer continues. “The question is, does this diet improve symptoms in IBS patients? Unfortunately, there is a huge unmet need in these patients, because there are few effective treatments. That’s why at the Amos Center, we do our best to provide excellent clinical care, with gastroenterologists, allergists and immunologists, psychiatrists, nutritionists, and a whole team who approach the patient’s care from many different angles. Then we also have the opportunity to conduct research, to try and identify potential therapies for these people who are really suffering. They’re frustrated, at the end of their rope sometimes when they come to see us. We use everyone’s input to treat them holistically, and also to try new things.”

One of these new things is a diet so simple that – as the commercials put it – “a caveman could do it.” If the Paleo diet does indeed help make people with IBS feel better, understanding why it works at gut level is something we’re only beginning to have the scientific knowledge and tools to decipher.

The Amos Center is a CIM initiative, made possible with the support of Mrs. Courtney Amos and Mr. Paul S. Amos.