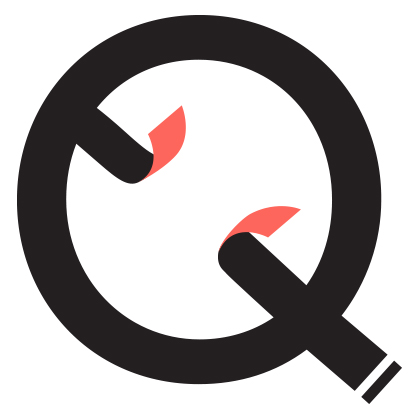 Quitters Break Free – a new logo and a positive theme of freedom, instead of the negative, “smoking is prohibited.” This image was developed by the MICA Center for Social Design and the Center for Behavior and Health for an upbeat, shame-free campaign.

Maybe you saw them in high school: the stark pictures of a desiccated multi-pack-a-day smoker, holding a cigarette to the tracheotomy hole in his or her throat. They were shocking on purpose, and this kind of fear campaign worked pretty well for decades. The number of smokers in America dropped sharply from about 45 percent in the 1960s to close to 20 percent today. But there it sits, right around 20 percent. We’ve plateaued. And yet, like a stuck needle on a record player, health advocates have kept on using the same scare tactics to get people to quit – and smokers, who have heard it countless times, are tuning it out.

Want to Be Healthier? We’ve Got an App for That

In 2013, CBH clinical psychologist Hillary Hatch developed an app for the iPad called Vital Score. It’s a simple tool designed to help doctors do what they really want to do – help the patient become healthier – by shifting the patient’s perspective from changing behavior to improving self-care. It is upbeat and friendly, an arm around the shoulder instead of a kick in the pants. Hatch designed the app as “an ice-breaker,” something for the patient and doctor to talk about together. “It’s a score, not a judgment,” she says. It’s not just for quitting smoking but for other things that someone might want to talk about, too, including being overweight, problems with alcohol or drug addiction, or having trouble sleeping.

Culture of health vs. culture of death: Michael Smith, Ph.D., Director of the Center for Behavior and Health (CBH) and the CIM’s Alafouzos Scholar, believes it’s time for a new, positive strategy that celebrates all the good things that come from being a quitter – and he’s got a doozy of a new approach. Because this is CIM where, as Director David Hellmann, M.D., puts it, “we go where the experts are, and tap into others’ skills to be more effective,” Smith went right outside the box for ideas – to the Center for Social Design at the Maryland Institute College of Art (MICA).

“I thought we should talk to some artists and do a collaboration,” Smith says, “and come up with messages that are different, that we could package around a broader area of health behaviors.” To develop the ideas for the campaign, members of the CBH actually went back to school – to sessions of a special class, whose students and professor were focused on building the CBH’s behavior-changing principles into the messages they created. There was a lot of brainstorming, a lot of kicking around different ideas, and a lot of listening. “They ran with it.”

Everyone recognizes that smoking is a huge problem; it’s the number one cause of preventable death. But even though doctors always ask if their patients smoke, and they talk about how smoking is bad, “they have such a short time with a patient to try to effect any change, doctors often feel pessimistic, they don’t know how to counsel.” (Another CIM effort is addressing this, too; see side story.) In turn, he adds, patients are embarrassed. They don’t want to talk about it.” They know smoking is harmful for their health; of course they do – it says so right on each pack of cigarettes. Smoking is prohibited on the Johns Hopkins Bayview campus, but some of our streets are Baltimore City streets, “and people have a right to smoke in those areas. It’s hard to have a coherent policy when you can’t necessarily say no smoking anywhere on campus.” And it’s not just patients, either; many Bayview employees smoke, as well. “We want to create a culture of health at Johns Hopkins Bayview,” says Smith, “and if we’re going to do that, smoking needs to be one of the things we talk about.”

“We want to create a culture of health, and if we’re going to do that, smoking needs to be one of the things we talk about.”

Smith wants to convey another message, as well: what it’s like for someone who is trying to quit. It is really, really hard. Doctors and loved ones may get discouraged if they talk to someone about quitting and the person either keeps right on smoking, or quits but starts back up again. They shouldn’t, says Smith. Very few people manage to quit smoking in one hard-core attempt. Instead, it takes several tries – on average, 11. “Each attempt to quit is not a failure. Instead, smokers are increasing their own readiness to change over time. There may be setbacks, but in the broader perspective, every effort builds on the previous one. If you talk to a smoker about quitting, it may not kick in this time, but it’s important that the seed has been planted.”

The new campaign, says Smith, “meets the audience where they are.” It encourages “health-seeking” behavior, identifies systems of support, including counseling and appropriate medications to help fight the addiction. It is “non-shaming” – this is particularly important, because if people feel ashamed, they tend to withdraw and turn away, seeing judgment instead of a desire to help – hopeful, empowering, and honest. “We want people to know that smoking cessation is not a one-day event, and that quitting smoking at any time has measurable, wide-reaching benefits,” not just to health but to the wallet; and the money saved from an expensive habit can be used to buy fun stuff. The campaign celebrates quitters.

It takes about seven minutes to smoke a single cigarette. So, one arm of the campaign is “7 for 11” – encouraging smokers to swap seven minutes of nicotine for 11 minutes of extra life. The CBH will establish an attractive, engaging “Quit Center,” a place for smokers to go for resources about quitting. “We hope this will take the burden off doctors to be experts on smoking cessation,” says Smith. “Instead, they can refer their patients to the Quit Center.” This “7 for 11” idea will appear many places – at campus bus shelters, on park benches, T shirts, tote bags, buttons, a “Quit Kit” box packed with information, and even an app, on which “quitters can track their attempts, communicate with other quitters at Bayview, and calculate their financial and health savings.” The app also gives progress updates to the quitter’s doctor or counselor.

Another arm of the campaign is signage – posters and banners with the message that “Quitters make their dreams happen.” Some of these message may include, “This puff of smoke didn’t buy this trip to Ocean City,” showing a couple relaxing on the beach; or “This puff of smoke didn’t buy this pair of heels,” showing a pair of Jimmy Choo-height pumps. Other posters show a cute puppy, or a Ravens ticket, and even an engagement ring, all purchased with money that didn’t buy cigarettes. A recognition wall, with photos of people who are giving up smoking, will say, “Quitters break free at Bayview.”

“Each attempt to quit is not a failure. Instead, smokers are increasing their own readiness to change over time. There may be setbacks, but in the broader perspective, every effort builds on the previous one.”

There’s a twist on the familiar “do not smoke” symbol – the red circle around a smoking cigarette with a slash through it. A new MICA-created logo is an airy blue circle with a broken cigarette instead of the slash – making the shape of the letter “Q.” This “shows a cigarette being ripped in half, and the quitter is breaking free from being controlled by addiction.” There’s even a board game that shows how hard it is to quit. For example, you may draw a card that says: “Your boss invites you for a smoke break and to keep up a good relationship, you decide to take a smoke with him.” Lose four points. On the other hand, if your card says you decided to meditate instead of smoke a cigarette, you gain four points.

The next step, says Smith, is to pilot these ideas, “test them out, see which messages seem to work best, and which don’t.”