A Ticking Timebomb: When Lyme Disease Doesn’t Really Go Away 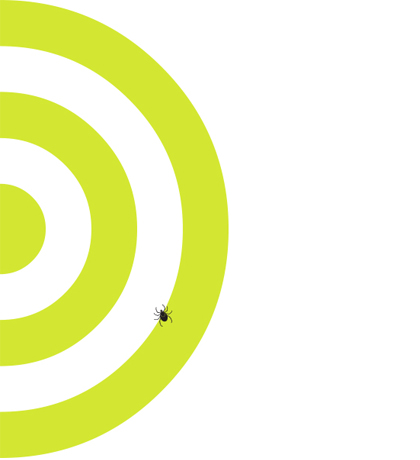 Ticks are evil. Deer ticks are even worse: little dots of evil, the size of a freckle. They spread Lyme disease, and what can happen next sounds like a horror movie.

But first, the ticks: They are the minuscule vectors that transmit Lyme disease. But really what they transmit are corkscrew-shaped bacteria called spirochetes. (Their official name is Borrelia burgdorferia; the disease is also known as Lyme borreliosis.) Spirochetes are real lowlifes in the disease world; another devastating disease they cause is syphillis. Although deer get the blame for the epidemic of Lyme disease that has hit the East Coast particularly hard, they’re just a truckstop for the ticks; a place to grab a quick meal. “Deer are immune to Lyme disease, but they are an important food source for the ticks that transmit it,” says John Aucott, M.D., an infectious diseases specialist and renowned expert on Lyme Disease, and the founding physician of the Lyme Disease Clinical Research Center. No, the real source, or reservoir, for these nasty spirochetes are rodents such as the white-footed mouse.

So let’s say you’ve been bitten by a deer tick. Most likely, you never noticed it. You may not even know you’ve been bitten unless you happen to see a telltale, bullseye-shaped rash, called Erythemia migrans – which may or may not show up after the tick sucks your blood and in return gives you the gift that keeps on giving. You may not get sick right away, either. If you do, you might mistake what’s happening as the flu. With symptoms like a headache, low-grade fever and chills, fatigue, swollen glands, achiness, and a stiff neck, who could blame you? If you’re lucky, you take antibiotics, and you get better.

If you’re not lucky, you may or may not take antibiotics, you may or may not feel better, but you won’t truly be better. Instead, the disease will get worse, as the spirochetes burrow further into your body. “Lyme disease is a heck of a lot more complicated than many people realize, because it’s got a lot of variables,” says Aucott. “Like syphillis, it’s got multiple stages; so there’s early Lyme disease, the period within weeks after the tick bite. That’s primarily a skin infection with the rash. Then in the two- to six-week range, the spirochete disseminates and the illness changes forms,” as the infection moves outward from the bite; these are the flulike symptoms. “In some people, the disseminated bacteria end up in organs like the heart, or in the nervous system – so the symptoms could look like heart trouble or meningitis. It’s kind of a moving target with all these different manifestations, depending on how far the disease has progressed.”

You may not even know you’ve been bitten unless you happen to see a telltale, bullseye-shaped rash – which may or may not show up after the tick sucks your blood and in return gives you the gift that keeps on giving.

Basically, at every stage, even the rash, Lyme disease has the potential to be misdiagnosed; especially if nobody connects what’s happening to the bite of a pencil point-sized tick. “Then in the third stage, which may be six months or even years later, you can get arthritis,” says Aucott. “So you have all these seemingly disparate illnesses that don’t appear to be related, but they’re all due to the different phases of the bacteria.” Treatment varies, depending on how widely the infection has spread. “The earlier you treat it, the easier it is to treat. If you catch it early with the rash, which is what you want to do, it’s much easier to treat than if it’s already disseminated and the patient has had heart or nervous system involvement or joint problems. It gets harder and harder to treat.”

Basically, at every stage, Lyme disease has the potential to be misdiagnosed; especially if nobody connects what’s happening to the bite of a pencil point-sized tick.

But it’s still treatable. Sharon Akers, who runs the Edward St. John Foundation, a philanthropic organization that has helped support Aucott’s work since 2010, has seen many people – friends, coworkers, family members – who were misdiagnosed, whose symptoms kept getting worse, people who became discouraged and thought this nightmare would never end – find hope and get better under Aucott’s care. She recalls one young lady, whom she and Edward St. John referred to Aucott after seeing her at a crab feast, walking “like she was drunk. Her gait was horrific,” Akers recalls. “It turned out that she was also having chronic headaches and dizziness.” Aucott diagnosed the Lyme disease, figured out that the girl’s first exposure had been years earlier, and began to treat the bacteria and address the neurological impairment. “She still has a little residual damage, but now she is totally functional and back in school.”

With Lyme disease, the big question is, “is it really gone?” When symptoms improve, sometimes all the spirochetes have been killed, but not always. Instead, what’s happening may be the disease equivalent of that deceptive calm at the end of a creepy movie; just when you think it’s safe to go back in the water, it’s not. Worse, Lyme disease can seem to shape-shift, to present with a whole new constellation of symptoms.

Eight years ago, Aucott, along with Antony Rosen, M.D., head of the Division of Rheumatology, and immunologist Mark Solosky, Ph.D., officially started a clinical research program. “We decided it was the perfect opportunity to put together a classic translational research program,” says Aucott, “one that bridges patients and the laboratory.”

The focus of Aucott’s research is “this whole phenomenon we call post-treatment Lyme disease syndrome” (PTLDS). “Patients call it chronic Lyme disease, but we’ve tried to get away from that,” because it’s not entirely accurate. “It’s a distinct part of Lyme disease that happens in a subset of patients who, when treated with antibiotics, don’t fully recover their health. That’s the controversial part of Lyme disease, because it’s much harder to get a handle on.” For example, some of the key symptoms – fatigue, pain, and inability to think clearly, or other cognitive issues – are not-very-specific pegs that could fit the description of many illnesses. “Some people think it’s really nebulous,” Aucott adds, “and to some extent, they’re right. Because there is not real blood test for PTLDS. Patients know they aren’t getting better, but until there’s a blood test to confirm that you have PTLDS, it’s going to be very hard to separate those symptoms from those of other syndromes like fibromyalgia or chronic fatigue.”

Aucott and Solosky are actively looking for biomarkers – telltale molecular signs that say, “this person still has Lyme disease.” Right now, there’s a test that can show that someone has antibodies to Lyme disease, but that’s about all it shows. “The test shows exposure, and exposure is not the same as active infection,” says Aucott. “For instance, I have antibodies to chicken pox because I had it when I was a kid, but it doesn’t mean I have chicken pox today. Those antibodies have a memory, and they stay in your system for years or decades. But the presence of antibodies doesn’t mean someone is actively sick from the infection; it just means your immune system has been exposed to it sometime in the past.” Another issue: Even if the antibodies show up, it doesn’t necessarily mean that someone’s fatigue is due to Lyme disease. It could be something else. Still other issues: The antibodies can sometimes go away. “It’s not predictable what they’re going to do.” Also: “You can get it more than once, because there are different strains. You’re not protected; I’ve had patients who have gotten it two or three times.”

With Lyme disease, the big question is, “is it really gone?” When symptoms improve, what’s happening may be the disease equivalent of that deceptive calm at the end of a creepy movie; just when you think it’s safe to go back in the water, it’s not.

In highly sophisticated detective work, Aucott and Solosky are studying patients using proteomics – the study of ultra-specific proteins, which are like footprints in the blood. “What makes our study very unique is that we have the patients at the time of their initial diagnosis, when they have the rash, before they even get antibiotics,” says Aucott. “Then we follow them for seven visits,” taking blood samples each time. “So we can follow these proteomic shifts” – the trail of the footprints – “just like you would in a patient who’s having a heart attack, except our time scale isn’t a matter of hours, but many months.” The goal is to find changes over time that can lead to a test that says, “This person still has active Lyme disease,” or “the disease is not active in this person.”

The real Holy Grail, Aucott continues, “would be if we can find a pattern that identifies people who are destined not to recover completely, the people who are going to need further intervention because they’re destined to go on to PTLDS. In medicine, we like to treat people, but then we also like to repeat their test and show that they’re cured. Like in cancer, you repeat the CT scan, or in a heart attack, you repeat the EKG. But in Lyme disease, there’s nothing to repeat, nothing to show that the person has recovered.”

Still other things to think about: When someone with Lyme disease doesn’t get better, is it because the antibiotics didn’t kill every last bacteria and a few remain dormant? “That’s one hypothesis. Or maybe the infection triggered an autoimmune disease; there’s good precedent for that, as in rheumatoid arthritis. Or maybe it’s a combination of the two; maybe most of the infection is gone, but that little bit triggers an ongoing inflammation.”

Hopkins is the first academic medical center to “formally embrace the challenge of doing research on these chronically ill patients that nobody seems to understand,” Aucott states. “I’m really proud of Johns Hopkins for being willing to tackle this.”