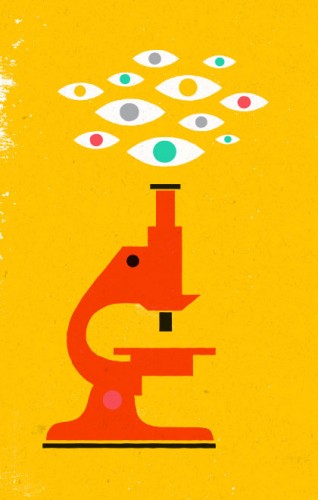 “Why do I feel bad?” “Could it be that something in my diet is making me depressed?” “How do I know if what I eat is making me sick?” These are questions that, even a few years ago, doctors and scientists didn’t really ask because the connections weren’t there yet. That has changed considerably.

The gut-brain connection is the focus of the new Johns Hopkins Food, Body & Mind Center, where the science, if Hollywood were to pitch the story, is a fusion: Gastroenterology meets Neuroscience, meets Microbiology, meets Immunology, meets Psychiatry. The collaborations are new because, frankly, nobody thought to put these scientists and clinicians together until recently. Nobody realized just what an important role the gut plays in diseases that seem like they wouldn’t trouble the intestines – illnesses like diabetes, heart disease, depression, even cancer. Now, with the help of a generous gift provided by Mrs. Courtney Amos and Mr. Paul S. Amos, the new Center is one of a few places in the world dedicated to studying the links between diet and disease, and also the role of good and bad bacteria in making us sick and keeping us healthy.

The Center, which opened in July, is co-directed by Pankaj “Jay” Pasricha, M.D.,who also directs the Center for Neurogastroenterology at Johns Hopkins Bayview, and Glenn Treisman, M.D., Professor of Psychiatry and Behavioral Sciences. Pasricha and Treisman see patients together, along with doctors including Emily McGowan, M.D., who specializes in allergy and immunology, gastroenterologists Sameer Dhalla and Ellen Stein, and nutritionist Carmen Roberts, R.D. “We evaluate these patients and come up with integrative, holistic, and compassionate ways to address their problems,” says Pasricha. The center has just received Johns Hopkins Internal Review Board approval to start studying some of the mechanisms by which food can affect physiological processes, and “our next priority is to start enrolling patients.”

Pasricha, Treisman and Cynthia Sears, M.D., who chairs the Center’s Scientific Advisory Board, wanted the word, “compassionate,” to be part of the Center’s mission statement because many of their patients come to them by way of a rather long road. Basically, they’ve been through a lot – medicines that may not have worked, for example, or doctors who may have addressed one of their problems without realizing the whole body was involved. Understanding that journey requires some basic knowledge of the gut-brain axis.

So the patients’ symptoms the doctors in the Food, Body & Mind Center might expect to see on any given day might include nausea, swallowing difficulty, abdominal pain, diarrhea, or constipation; joint pain, swelling, inflammation or rash (from food allergy or intolerance); depression or anxiety; and also problems with the metabolism, such as insulin resistance and type II diabetes. Pasricha has shown in mouse models of diabetes that there is remodeling of the enteric nerves that help control insulin production; he believes that a new approach to treating diabetes – by changing the way the nerves signal to each other – may be on the horizon.

The gut has at least as many neurons, or nerve cells, as the spinal cord.

Pasricha is involved in many research projects involving multiple aspects of the gut-brain axis. He is very interested in the pancreas, in exploring “how the gut can be a signal that drives metabolic disease,” he says, and “finding the mechanism by which gastric bypass surgery relieves insulin resistance and diabetes.” He also is working to learn more about how the nerves work in the gut, namely, “all the triggers in the gut wall that allow the entry of foreign substances, and perhaps invoke either an immune response or have toxic effects on the rest of the body.”

Although Pasricha is a gastroenterologist, this work defies a single discipline. “In my practice, there are so many patients with functional bowel disease who also have additional psychosocial problems, such as depression,” he says. “We learn to treat them as full patients. A lot of the drugs they use affect both the brain in their head and the brain in their gut.”

This is where Glenn Treisman comes in. Treisman, who was recently honored as the Eugene Meyer III Professor of Psychiatry and Behavioral Sciences and Medicine, “brings a deep understanding of the pathophysiology and neuropharmacology of both nervous systems,” says Pasricha. “His presence is an invaluable asset for the Center and a major draw for patients and their referring physicians. Glenn and I learn a lot from each other as we try to work out a rational way to approach these patients, so the same kind of drugs can affect both their GI symptoms and their mental and behavioral symptoms.”

The gut produces 90 percent of the body’s serotonin and half of its dopamine; these are powerful neurotransmitters that affect mood, help the mind stay calm and focused, and are natural anti-depressants.

The Worlds of the Microbiome

Now, what about the gut bacteria? Sears, who has spent years studying the pathogenesis of enteric infections and infectious diseases, has recently extended her research, plunging deeper into understanding the broad interactions between the gut’s microflora and our health. Rapidly expanding evidence, she says, suggests “that the complex communities that we carry with us – which are on every surface of the body, on every orifice and on the mucosa associated with that orifice – are essential to health. But they’re also associated with disease, both at the local place where these communities reside, and then distantly. They influence liver function, the function of the deep tissues, the enteric nervous system. There’s data to suggest they affect heart disease, they may be related to pancreatic conditions, may be linked to our mood and psychiatric disorders, as well as our weight. This concept is amazing, particularly the idea that they can influence our mood and how we function in life.”

The center’s purpose, Sears believes, “is to provide superb medical care to individuals who are experiencing issues that often involve intestinal symptoms combined with a sense of dysphoria – not feeling well, and often a little difficult to put your finger on a specific diagnosis.” Related to the diagnosis may be “things that we’re not even very good at classifying,” and one goal she shares with Treisman and Pasricha is to seek specific mechanisms and potential markers to help address problems in more focused ways.

Many patients come by way of a rather long road. Basically, they’ve been through a lot – medicines that may not have worked, or doctors who may have addressed one of their problems without realizing the whole body was involved.

To give an idea of the complexity of the microbiome: One way to study it is to sequence the bacteria in stool samples. “But we know that the bacteria that are adherent to the mucosa (the mucus lining) in the colon are not necessarily the bacteria in the stool.” So, there are mucosal communities of bacteria, and also fecal communities. “You can look at what’s there through sequencing, or look at the function of that community, looking at the genes that are present, at pathways, at metabolites in blood as well as urine.”

One area of research in the Center involves neural imaging – new ways to look at the nerves. New advances in imaging can help the scientists “try to make connections between precise bacteria, or molecules, or metabolites,” says Sears, “and see if this changes the function of those tissues.” The good news, even though what they’re studying is so complicated, is that “there has been a real revolution in the technology. It has gotten vastly less expensive and faster. We can do things that weren’t even remotely feasible a little over 10 years ago.”

The ideas are as mind-boggling as the advances in technology. Imagine that you have depression, and you’ve been told, “You need an antidepressant,” and you are still struggling, and one day a doctor tells you, “The problem could be in your gut.” This discussion is very new, says Sears. “Our hope is that we will be able to identify the bacteria that produce the right metabolites – the ones that make you feel better,” to change the function of the microbiome. “So if the microbiome has bad molecules, that we could modify it or treat it in such a way that you get good molecules and change the balance.”

Imagine that you have depression, and you’ve been told, “You need an antidepressant,” and you are still struggling, and one day a doctor tells you, “The problem could be in your gut.” This discussion is very new.

Will this eliminate the need for antidepressants? Probably not, Sears says. “But there are a lot of people who probably don’t fit into classic psychiatric criteria, who don’t feel well. So this idea that we can use food and possibly ‘good’ bacteria to modify function and make someone feel better, and help turn someone’s life around, is very intriguing.”