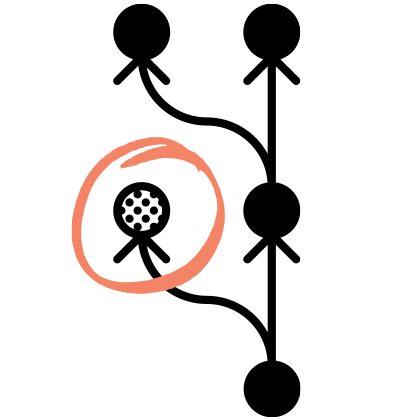 Many of us learned in high school biology about the “mighty mitochondria” — the powerhouse of the cell that turns energy from food into energy that the cell can use.

But what you may not know, explains Hopkins cell biologist Hiromi Sesaki, is that every one of our cells is actually packed with hundreds of mitochondria, all toiling away to give our heart and brain and lungs the energy they need to function effectively. To do that work, the mitochondria are constantly dividing.

Hiromi Sesaki is the second Johns Hopkins scientist to receive funding as a Karen and Ethan Leder CIM Human Aging Project (HAP) Scholar. The first was molecular biologist Qinchuan Wang, an assistant professor of medicine in the lab of cardiologist Mark Anderson, director of the Department of Medicine.

Wang and Anderson’s lab are looking at the evolutionary oxygen-sensing development of an enzyme known as CaMKII. Their goal is to find ways to preserve the benefits of oxidized CaMKII — which promotes skeletal muscle strength when we are younger — and to minimize its damage as we age, since CaMKII activation damages many tissues in the heart, brain and skeletal muscle. This makes us more susceptible to diseases linked to too much oxidation, such as heart disease, cancer and cognitive decline.

The work of Wang and his colleague, Anderson notes, could have dramatic implications in the quest to prevent frailty, reduce the burden of diseases related to aging and extend our life span.

“This division is very dynamic — it’s happening all the time, and it’s a crucial process because it serves as a type of ‘quality control’ within the cell by removing damaged mitochondrial DNA that accumulates,” explains Sesaki, a newly named Karen and Ethan Leder CIM Human Aging Project (HAP) Scholar.

This damage removal process is known as mitophagy. And as we age, our mitochondria become less adept at mitophagy — at removing the “trash” (DNA mutations and deletions) and other toxins that accumulate in our cells.

Thanks to his new Leder Scholar funding, Sesaki and his lab are zeroing in on the biology of the mitophagy process. “We hypothesize that decreased mitophagy contributes to reduced mitochondrial health during aging, leading to neurodegenerative diseases such as Parkinson’s disease and Alzheimer’s,” he says.

But there’s a bright side, he notes: “We also think that enhancing the mitophagy process could allow us to slow — or even reverse — some of the ravages of human aging.”

Their research has two parts. In the first part, Sesaki and his team are developing a mouse model that has been genetically engineered (through a high-tech process known as CRISPR) to allow the scientists to stimulate mitochondrial division. These genetically engineered mice, dubbed eMitophagy mice, “will allow us to examine the specific impact of enhanced mitophagy on aging at the whole organism level. Specifically,” he says, “we’ll be looking at the brain and heart — two major organs that are affected by aging and that have a high demand for mitochondrial energy.”

“We hypothesize that decreased mitophagy contributes to reduced mitochondrial health during aging, leading to neurodegenerative diseases such as Parkinson’s disease and Alzheimer’s.” — Hiromi Sesaki

In part two of the project, the scientists will focus on real human cells, from people ages 2 to 96, obtained through a biobank repository. The researchers will use live-cell imaging to compare mitophagy activity between young and old cells. Then they will test to see whether enhancing the mitophagy process can improve mitochondrial health in cells of people of all ages.

Ultimately, says Sesaki, the outcomes of both avenues of study could provide fundamental evidence that enhanced mitophagy has potential clinical benefits against aging-associated changes in mitochondrial health, as well as brain and heart function in mice and human cells.

“This could have a transformative impact,” he says, “allowing for the future development of drugs that could target cellular mitophagy to improve the quality of life during aging — and therapeutic interventions for diseases like Parkinson’s and Alzheimer’s.”

It’s worth noting that until Sesaki received the Leder Scholar funding, he had not worked directly on the problems of aging. It was the call for proposals from Jeremy Walston, Human Aging Project director and the Salisbury Family CIM Scholar, that got Sesaki thinking about how his investigations into mitochondrial biology could have implications for aging biology.

“The Leder Scholar funding has given me and my lab an excellent opportunity to move into the area of aging research, and I expect multiple new collaborations with HAP investigators to emerge,” says Sesaki. He adds, “I plan to apply for an R01 from the National Institute on Aging during the term of my Leder grant, and I’m confident that this support from the Human Aging Project will enable us to obtain exciting data to be competitive in that grant application.”