The Court is In Session 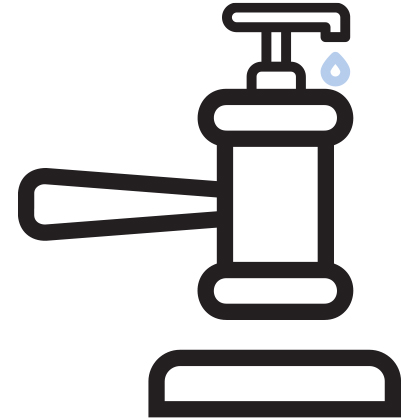 Jonathan Zenilman, the Lavinia Currier CIM Scholar, is internationally known for his work in infectious disease epidemiology. He has led the national effort to track and prevent antibiotic resistant gonorrhea, and here in Baltimore, he has overseen programs to track and prevent sexually transmitted infections for many years.

So when COVID-19 descended on the United States last spring, forcing local and federal courts to shut down for in-person trials, it’s no surprise that he was tapped by James Bredar, chief district judge of the U.S. District Court of Maryland, for guidance on how to reopen the courts once conditions allowed.

“The courts had been able to handle many things remotely, such as paperwork and some hearings,” says Zenilman. “However, the Constitution guarantees the right to a trial by jury, and you can’t get around that. The question became: How do we do this safely?”

Zenilman spent a long day in June surveying the courthouse facilities with Judge Bredar, including the public spaces, back-office areas, judges’ chambers and the holding area for those awaiting trial. Informed by suggestions from Zenilman, the federal district courts in Baltimore put in place a series of safety measures that allowed some jury trials to resume in late June. The federal district courts opened to the public at the end of September.

“We basically re-engineered all of the standard processes,” says Zenilman.

That starts with symptom screening before anyone may enter the courthouse. The voir dire process to select a jury panel is now being conducted by video, and potential jurors who move on to the next round walk into the courtroom one by one. “It’s all very carefully choreographed,” he says.

Once a trial starts, jurors are separated from one another by six feet, to ensure physical distancing, and plexiglass shields are in place in key areas of the courtroom. Everyone in the courtroom must wear a mask throughout the day, except those on the witness stand. Those who testify enter a large plexiglass booth, which is connected to a HEPA air filter, then remove their masks and wear transparent face shields while speaking.

“The Constitution guarantees the right to a trial by jury, and you can’t get around that. The question became: How do we do this safely?” — Jonathan Zenilman

“The consensus was that there is a clear interest for jurors to see the faces of those who are testifying,” says Zenilman.

Judge Bredar points to this modification as being particularly valuable. “The court would never have been comfortable making that adjustment on its own,” he says. “Having Dr. Zenilman on board allowed us to find nuanced solutions to our problems, where public health needs might seem to conflict with the needs of justice. He had some very clever solutions to our problems.”

Zenilman adds, “We also worked with a ventilation engineer to optimize ventilation throughout the courthouse.”

Bredar was so impressed by Zenilman’s counsel that he asked the epidemiologist to provide expert guidance to his judicial colleagues in other parts of the country.

“I serve on the judiciary’s national coronavirus task force with three other judges, and it occurred to me that it would be useful for judges in all 94 districts to hear from a panel of epidemiologists who are independent academics,” says Judge Bredar. “It’s not necessary that they agree with each other on every point. The idea was to have the panel address all of us, take our questions, argue about the answers in our presence and reason things out.”

So Zenilman asked three other experts to join him on a four-person team: Katie Passaretti, director of infection prevention for Atrium Health in North Carolina; William Schaffner, Vanderbilt infectious disease specialist and former Tennessee State epidemiologist; and Daniel Diekema, director of the Division of Infectious Diseases at the University of Iowa, who is an expert in airborne transmission. The group has conducted a series of conference calls with judicial leaders across the U.S. and more recently for federal defenders and court administrators.

The scientists are filling an information void. “Those on the calls are eager for answers,” Zenilman says. “They can ask all kinds of questions, and we are basically doing problem-solving in real time.”

And that, Zenilman says, is what he finds so exciting about this line of inquiry. “It’s the application of scientific principles and clinical judgment to really figure out solutions to a problem where there is no template. That’s the type of stuff I really like.”

For his part, Judge Bredar praises Zenilman, who is volunteering his time, “for his willingness to step forward and bring his expertise to bear as we endeavor to keep the courts open during this pandemic. He is a wonderful citizen.”